"Will passenger David Tinney please see the agent at the service desk, gate 10."

As I approached the counter with a BIG smile, I say to the agent, "Good morning! Are you going to upgrade me to First Class?"

The agent smiles back and replies, "Yes. The flight is overbooked and I need your seat in coach."

I grinned at her and said, "Thank you" as she hands me a new boarding pass, seat 5B, in First Class.

I'm sitting in First Class because airlines extend special privileges to their premium customers who fly a lot.

Here's how it works. If a flight is overbooked and they do that most of the time, the first thing the airline does is move their best passengers from coach to empty First Class seats, by way of a free upgrade.

Second, they'll offer a travel voucher for passengers to voluntarily give up their seat for a later flight. The vouchers will be from $100-400, depending on the situation. This is called "bumping" in frequent flyer jargon.

But back to my million miles, lifetime Gold status and First Class upgrade. Most of the million miles came from points I earned from purchases on my American Airlines Citibank credit card. Not from actually flying on a plane.

This is the fastest and least expensive way to accumulate massive amounts of points in your frequent flyer account.

"Least expensive by spending?" you say.

Not indiscriminate spending but wise and purposely putting monthly and reoccuring expenses on your credit card that earns points.

I shared this strategy with a friend of mine who is a dentist. He checked with his main supplier and learned he could purchase all his monthly supplies for his office with his American Express card.

Now, he's accumulating thousands of points each month in his American Express Membership Rewards account that previously he'd not been taking advantage of.

I've done the same thing with my Delta American Express card, a few years ago I made Silver Medallion level because of the number of points I'd accumulated this way.

More than likely, you don't own a business like myself or my friend the dentist. But I'm sure if you would take a few moments, you could think of several monthly exspenses you've been paying with a check. Give them a call and ask if you could begin paying that bill with a credit card.

The flight attendant just stopped by my seat and asked if I would like another drink. Membership and a million miles has it's privileges. 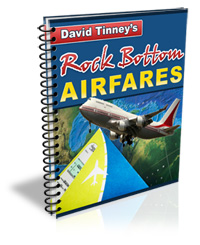 David Tinney is an acclaimed author, entrepreneur and humanitarian. He entered the travel industry in 1991, opening his own retail agency specializing in selling consolidator airline tickets. In 2002, he broke silence and began revealing secrets of the travel industry.

David's latest ebook, Rock Bottom Airfares, reveals 7 ways how to get a first class upgrade. Also included:
The airlines' best kept secret revealed
How to find true bargain fares
Options you have when its time to purchase
Where to find the best fares online
And much more...